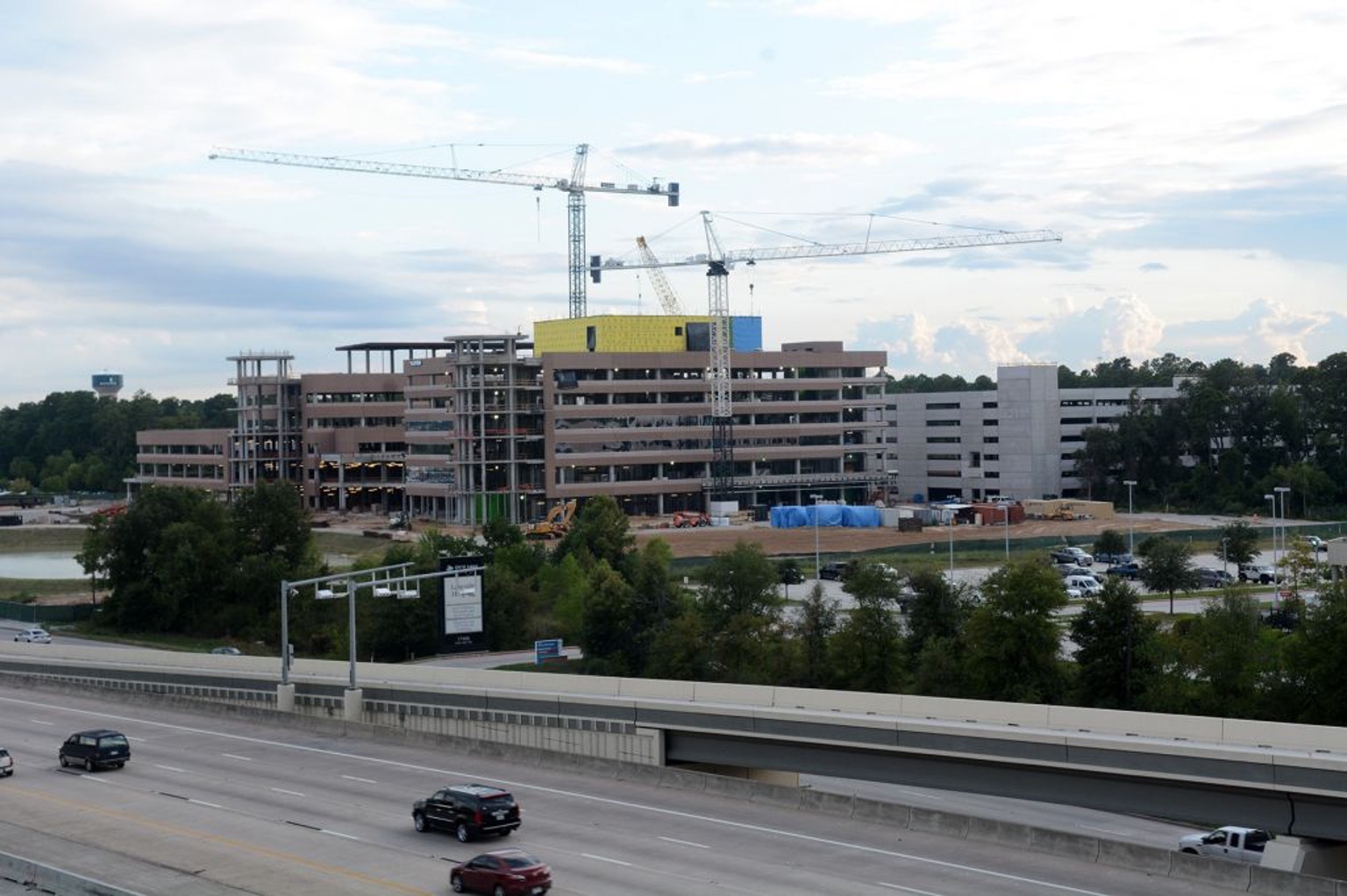 The Woodlands Development Co. is nearing completion of Three Hughes Landing, left, and leasing has become challenging given the downturn. The 320,000-square-foot Class AAA office building is expected to open in March. Two Hughes Landing, center, opened earlier this year. At right is One Hughes Landing.

The Woodlands Development Co. is nearing completion of Three Hughes Landing, left, and leasing has become challenging given the downturn. The 320,000-square-foot Class AAA office building is expected to open in … more

Business growth along the Texas 242 intersection with Interstate 45 has given a boost to The Woodlands economy. Texas Children’s Hospital’s $360 million, 548,000-square-foot pediatric facility is under construction on the southwest side of I-45 and Texas 242.

Business growth along the Texas 242 intersection with Interstate 45 has given a boost to The Woodlands economy. Texas Children’s Hospital’s $360 million, 548,000-square-foot pediatric facility is under … more

The Woodlands has largely been insulated from the effects of the downturn in the oil industry in the last year.

While more than 200,000 jobs were reported to have been cut globally, about 30,000 of which were cut in Texas during a nine-month period, The Woodlands still experienced economic growth. Now with oil prices sinking to new lows, businesses in the area are paying more attention to fluctuations in the oil markets.

For more than a year, industry insiders and laymen alike have been preparing for a slow comeback as the international benchmark Brent crude fell to a seven-year low in December of $36 a barrel, tumbling from a peak of $108 in June of 2014.

After prices took a nosedive in 2014, finishing out the year around $60 per barrel, a general sentiment among companies and analysts emerged that as long as oil stayed above the $40 threshold the industry could push through the downturn. But prices dipped below that threshold on Dec. 10 and have stayed there.

Signs of a slowdown tend to first reveal themselves in the office market. New office space can be more expensive and typically require a long-term commitment of five to 10 or more years. Staying put and not moving can be a way for companies to avoid unnecessary costs, especially if there are job losses and freezes which would mean the extra space might not be needed after all.

“Our main challenge in leasing is Three Hughes Landing,” said Paul Layne, executive vice president of master planned communities for The Howard Hughes Corp., about the company’s newest office building. “The companies that are already in place want to renew and are more hesitant to relocate in a down oil market, which is great for our existing buildings, but for our new building, it does provide a more challenging leasing environment to entice them to move to the very best, new building in The Woodlands.”

The office market has been healthy so far, with a near 100 percent occupancy rate for The Woodlands Development Co., a wholly-owned subsidiary of Howard Hughes, which has about 3 million square feet of office space in the area. Its most high-end offices are One and Two Hughes Landing, which are both located on the edge of Lake Woodlands in the 66-acre mixed-use development Hughes Landing.

But The Woodlands Development Co. is nearing completion of Three Hughes Landing, and leasing has become challenging given the downturn. The 320,000-square-foot Class AAA office building is expected to open in March. Although the current occupancy rate wasn’t disclosed, Layne said there was plenty of room to lease. The Woodlands Development Co. typically aims to fully lease its buildings prior to opening, like with Two Hughes Landing, which opened earlier this year.

“We are seeing positive signs with some companies wanting to be in Hughes Landing; they want to be able to walk to the restaurants on restaurant row, walk to Whole Foods, allow their employees to walk to work if they lease an apartment at One Lakes Edge, find the convenience of the Embassy Suites. All those things are positive, but they require them moving in. We will certainly try to make it as easy as humanly possible to make that happen,” Layne said.

On top of the commercial real estate market, single-family home sales slowed down in 2015. During the first 10 months of 2014, 2,018 home sales were recorded. During the same period in 2015, only 1,871 sales were recorded. The drop off in home sales affected those valued under $500,000, with the greatest sales drop recorded in homes valued between $250,000 and $499,000, according to the Houston Association of Realtors Multiple Listing Service.

“Whenever there is a slowdown in the employment sector, there’s a correlation in the slowdown of home sales. However, it seems in the past that when the home market gets slower, there’s a bit of a flight to quality, and some of the top tier master-planned communities don’t necessarily follow the trend in the market as a whole,” said Tim Welbes, president of The Woodlands Development Co.

Although with figures indicating a downturn in the economy due to low oil, The Woodlands doesn’t seem to be at risk of a major downturn.

The Woodlands is home to 17 energy company headquarters, including major employers like Anadarko Petroleum Corp. and Repsol USA. Headquarters generate sales and use taxes from mining and extraction, generate property taxes, and they boost the local retail and hospitality industry.

Headquarters also tend to be the last place where jobs are cut and tend to house more affluent employees, which trickles down to the local economy. This niche for housing headquarters has insulated The Woodlands, with a median income of $150,000 in 2014 and more than one-quarter of the population with income greater than $200,000.

“Fortunately, we have a market that consists primarily of headquarter-type operations. Headquarters are usually the last to be affected by a downturn like this. In other words, mass layoffs. At this point, … we haven’t heard of any major layoffs at the headquarter level,” said Gil Staley, CEO of The Woodlands Area Economic Development Partnership.

Even with a slowdown in real estate and economic uncertainty, The Woodlands Township is maintaining its 2016 budget, which was approved in the summer. The budget took into consideration the potential for a greater drop in low oil. Revenues are expected to increase by 5.8 percent for 2016, compared to a nearly 10 percent revenue jump from 2014 to 2015.

“These were discussions that we had in the budget process. We tempered our growth for the budget of 2016 back in August,” said Gordy Bunch, Township board member. “My expectations will be very cautious moving forward on any major expenditures until we have a better understanding of the impact of low oil and gas.”

The Township also expects that retailers, restaurants and hotels will continue to grow, projecting an increase of $1.3 million in sales tax and $2.1 million in hotel occupancy tax revenues.

Although oil below $40 a barrel has created even more uncertainty in the market, The Woodlands economy is diverse enough to weather the storm. And the future is looking even brighter. With the development of two new hospitals in what is becoming a medical corridor off Texas 242, more job growth is expected at a time of uncertainty.

“One of the brightest spots we have, and we’re very fortunate for that, is healthcare,” Staley said. “Healthcare is very vibrant for us right now because of our population growth.”