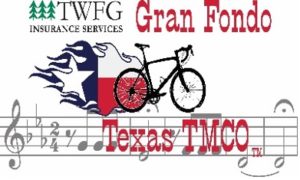 The TWFG Gran Fondo Texas TMCO charity bike ride made its largest-ever donations to the Texas Medical Center Orchestra and the National Multiple Sclerosis Society.  At TWFG offices in The Woodlands on Thursday, May 26, 2016, members of the event’s Steering Committee presented checks to the two charities totaling $75,000.  “These are very generous donations,” stated Alan Fritsche, orchestra board member, accepting on behalf of the orchestra.  “These funds will allow the orchestra to continue providing first class concert music at minimal cost to those who attend their concerts.”  The TMCO plays in concert halls, such as the Hobby Centers, Zilka Hall and the Wortham Center in Houston, as well as hospitals, including the Methodist Hospital Houston.  Smaller ensembles play at nursing homes, medical facilities and other hospital settings throughout the Houston area.

Receiving the donation on behalf of the National Multiple Sclerosis Society were Kelli Dreiling, Vice President of Development, and Cyronica Upshaw, Corporate Development Manager.  Ms. Dreiling stated that “This donation makes it possible for the Society to continue our programs towards stopping disease progression, restoring what’s been lost and ending MS forever”. Since its founding by Sylvia Lawry in March of 1946, the Society has invested more than $924 million to advance MS research, and is recognized as the catalyst for all major advancements in MS.

Gordy Bunch, CEO and President of The Woodlands Financial Group Insurance Services, sponsors the TWFG Gran Fondo Texas TMCO and hosted the check presentation event.  “We are delighted to be a part of such a dynamic service organization” said Bunch.  “The Woodland Financial Group focuses its public service support on active participation events that enhance healthy lifestyles for everyone in the community.”  Bunch recognized TWFG Gran Fondo Texas TMCO as an event that touches those throughout the Houston area.  “Our title sponsorship is another way for our company to show appreciation for the rapid growth our company has achieved since its founding here in 2001,” said Bunch.

Eric Powell, chairman of the Steering Committee, commented that this year’s ride was one of the most successful in the event’s history, not only because of the record donation to charities, but also because of the positive move to the new venue at Montgomery School District’s Sports Facility.   “This year’s ride featured a scenic route through the Sam Houston National Forest and some great roads in Montgomery and Grimes counties.  We extend our thanks to the communities of Montgomery, Anderson and Richards and to local agencies who supported the ride and we look forward to continued success in future years at our new home.”

The TWFG Gran Fondo Texas TMCO charity bike ride was founded in 2011 and this year’s event was held in Montgomery, with over 1,200 riders participating.  Over the past six years, it has had over 7,600 riders making it one of the largest rides recommended by the National MS Society as a lead-up ride to the BP MS 150 Houston-to-Austin ride.  Since inception, the ride has donated over $275,000 to the two charities.  Both the TMCO and the National MS Society are qualified charities under section 501c3 of the IRS code.  More information about the event can be found at www.granfondotexastmco.com.