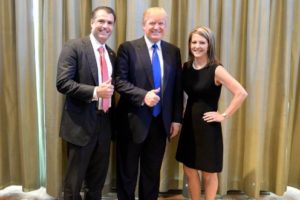 THE WOODLANDS, Texas – Gordy Bunch, chairman of The Woodlands Township Board of Directors and founder, owner and CEO of The Woodlands Financial Group, is heading to Washington with his wife Michelle for the inauguration of President-elect Donald Trump.

Woodlands Online chatted with Bunch about his upcoming trip to witness the swearing-in of the 45th president.

WOL: What, in your opinion, makes this a historical event?

GB: You’re dealing with a situation where someone has been elected the most powerful man in the world without ever holding public office in the past. I want to see what an entrepreneur can do in a leadership role.

WOL: You’ve spent several hours visiting with Trump right here in The Woodlands over the last few years. What strikes you the most?

GB: I’ve spent time talking with him about international affairs, from China’s devaluing the currency to Iran’s ambitions to get a nuke, to immigration challenges along the southern borders. He is a very approachable and knowledgeable man on many subjects. Although his commentary throughout the campaign didn’t really reflect well on him, he has a lot more substance to him than came out in the campaign and I hope to see him put that into action as our new president.

WOL: Where do you think he will make the biggest impact in the shortestamount of time?

GB: The absolute credibility he has toward negotiating agreements that are favorable to our country. Just look at what’s happening in the automobile industry — these plants that were slated to go to Mexico all of a sudden changed their minds and have decided to stay in the U.S.

I also think he will be quick in dealing with Congress and House reps that for years have passed the buck. I can see him calling them out.

Longer term, I’m encouraged by the possibility of real tax reform for all Americans. The repeal of Obamacare is coming up the pipe. And, as a veteran, seeing the reduction in forces and a lack of investment in our military infrastructure has been disheartening. I’d like to see Trump move us in a different direction.

WOL: What do you think about elected officials boycotting the inauguration?

GB: It reflects poorly on their maturity and leadership. The Office of the Presidency is a representation of our country regardless of party affiliation, and it is owed respect regardless of who’s in the chair. I don’t ever recall hearing about Republican protests or the independent protests of any president ever elected. It’s a reaction to today’s pop culture, reality TV and sensationalism. I don’t think it moves the needle on bringing our country together in any way, shape or form.

WOL: What are your thoughts on the next four years?

GB: There’s really no excuse going forward for the Republican Party to show what it can do. With the House and Senate in Republican control, I want to see some progress. I’m looking forward to seeing what can happen with Trump as leader.